For Nabokov common sense tells us 'our existence is but a brief crack of light between two eternities of darkness’.

Martin and I had just returned from our short Tuesday evening run. A circular excursion on tracks and roads, extending over roughly 7.5km from the car park on the Eastern side of the Norfolk Arms on the Ringinglow Road; a much-used minor road which heads west from Sheffield, giving a popular cycle route across Burbage Moor.

I was laughing. Contented. Happy. My sense of joy came simply from thinking about all that is impossible in the Greek word, metanoia. 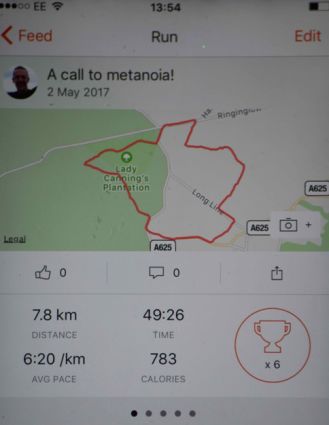 Martin’s response to my suggested title for our evening run – a call for metanoia – which our run and the use of the Strava App had evoked in my mind, brought more smiles and this brief reflection.

What I was getting at, in writing this title for our run on the Strava recording yesterday, was the impossible! Not something that could eventually in some way become possible, but the unconditional impossible that remains for ever so. In anthropological terms metanoia has been understood and interpreted as a fundamental change of perspective, an embodied and transformative change of heart in the way we view the world during the course of our everyday activities. I'm concerned here with running and other everyday activities. But, what I have in mind in mentioning 'metanoia' is the impossible at play in every possibility. 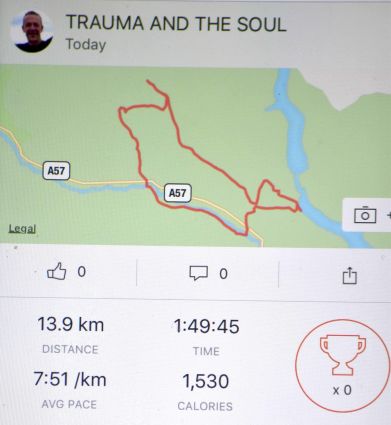 But, what does this mean? In making reference to transformations, what did I have in mind? It's certainly not a re-run of The Myth of the Hero with a Thousand Faces, who can somehow, against all the odds, make things possible again. Where's the impossible in all of this anyway? Even the mythic hero has to deal - at least implicitly - with the impossible. But, why's it such a big deal?

In some ways, I felt that it might be seen that I had finally succumbed to using the free ‘app’ ‘Strava’ on my iPhone as a way of recording our activities. There’s always a danger, of course, that in addition to opening new possibilities in the world, our many technologies, including our many ways of writing, which may be understood as instrumental devices used to create a means to an end; in each case having the effect of delimiting, so setting the limits in accord with the logics of their own means-ends structuring.

Our pathways and tracks on the moors are a case in point. As technologies, along with the equipment, know-how and skill used in creating photographs, they each tend to place limits on where we are encouraged to walk, run, cycle, travel, explore and so on.

In this way, we may sometimes miss or remain quite unaware of perspectives that may be gained from moving away from those everyday pathways. At first sight this photograph, for example, to some extent elides the very Ringinglow Road that runs in parallel with it on the right hand side. We just get a few clues/suggestions from the photograph that this may be the case - the path is straight and roughly parallel, the photograph is taken to view only the left hand side where this is an obvious boundary, there are no farm animals visible on this path etc. Of course, here we are dealing only with the possibilities, conditioned by this particular photograph and our various experiences.

Going ‘off piste’ is the term we use to describe explorations during our runs that take us away from the familiar everyday footpaths and so on. Many visitors to the Dark Peak, for example, in riding along the Ringinglow Road in their cars.... 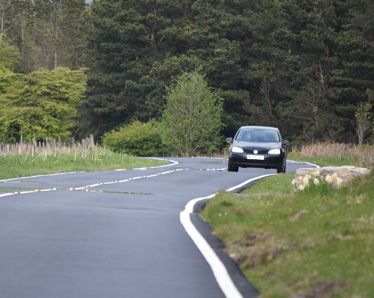 Many will never see the Ox Stones. 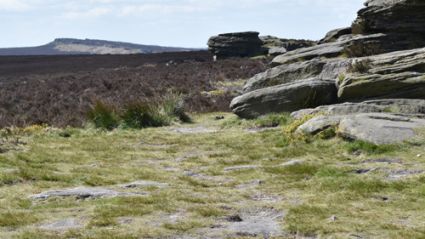 For many the possible visceral experience of touching, standing on, and looking out from this beautiful architecture lays hidden behind a rise on the moorland on the south side of the road. 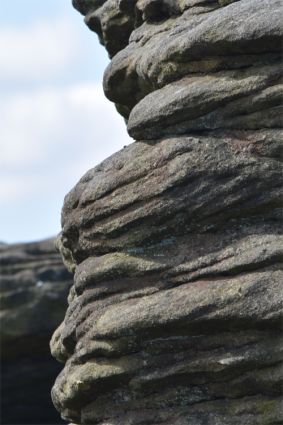 Again, here we are concerned with possible experiences that may be missed by visitors to the Dark Peak.

Yet, what's happened to the impossible?

The Strava App gives a way of recording and representing our runs, walks, cycling, swimming and so on in the form of a scaled map indicating where we have been, along with the length [km], duration [minutes/hours] and elevation gained in given activity [meters]. Upon leaving the Norfolk Arms we ran east about half a kilometer down the hill on Ringinglow before turning south by Smelting’s Farm. 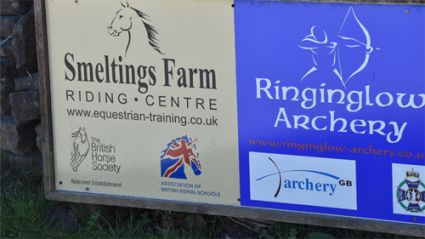 We could, of course, have created a photograph of the farm buildings, the farm animals, the fields... Naturally, the identity, Smeltings Farm, has con-texts which are always impossible to locate fully and completely. Here we start to get an indication of the impossible at play in each and every identity - the totalisation, fulfilment and completeness of any identity being impossible.

From the farm a rough track led across a number of styles.... 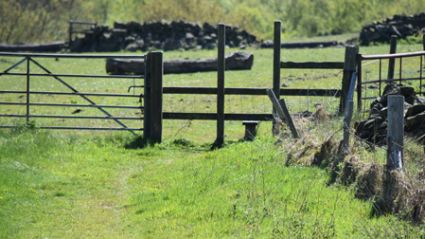 Then we headed east dropping down the upper reaches of the Limb Valley before turning south again around Rough Sandhills and over to Long Line Farm. Again, the picture gives an indication of more outside its own framing, which is alway impossible to identify.

Turning back from the minor road, Long Line, gave us a heady impressionistic mix of greens and browns. As this picture illustrates, with suitable technology there's no certainty concerning the colours that make up our everyday worlds. In some ways the impressionist movement in art, too, sought to explore the impossibility of ever grasping the movement and play of light and colour in the meadows, glades, gardens, rivers, trees, flowers... 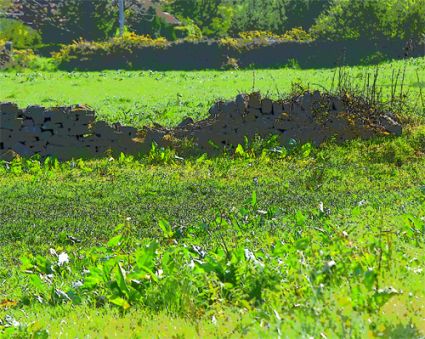 On this evening of contrasts our run then took us across the Tigers Rugby ground. In viewing this picture, of course, the impossible to identify backdrop of history and experience comes into play from watching rugby on the sidelines, in the stands or on the TV etc. 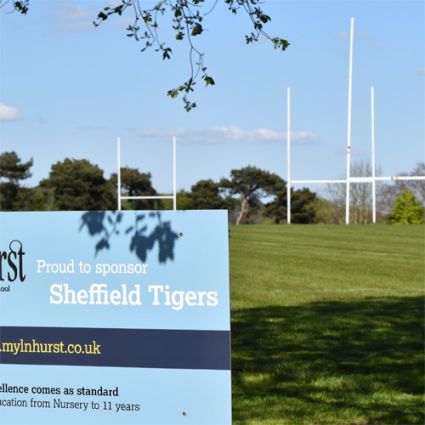 We ran as quickly as we could along the Hathersage Road in the direction of Howlett House in order to get away from the traffic. 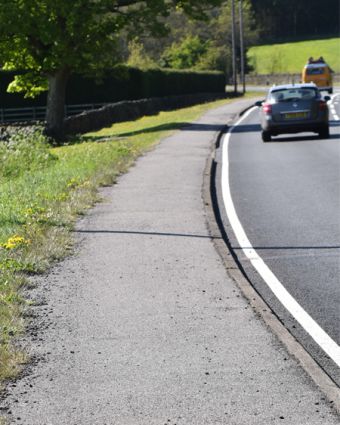 Turning north west through a gate and up and across the field soon led us to a gate onto Sheephill Road. 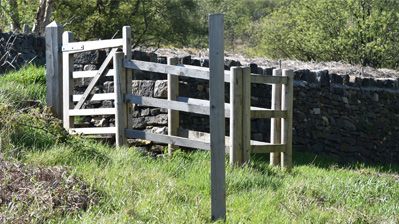 After a short run on the road we turned left to climb up again on Jumble Track, part of an 18th century system of turnpikes. 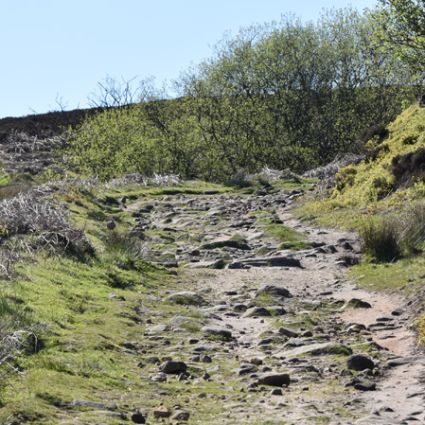 The crossroads of Jumble Track with Houndkirk Road was a welcome sight, marked by what has become familiar to us as a rudimentary way-marker. 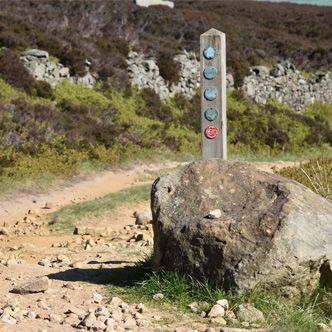 Houndkirk Road forms part of the 18th century turnpike road from Sheffield to Hathersage, though it doesn't find its way into Robert Macfarlane's very readable account of 'The Old Ways'. 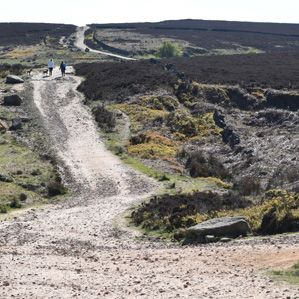 At this point those familiar with Strava will recognise there is a section from the cross roads up to the Ox Stones [0.9km] which you can time and compare with other times taken on the same section of the run. 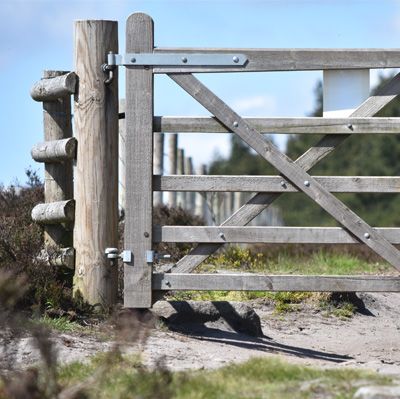 Similarly, one can record and compare times taken from the style below the Ox Stones down to Lady Cannings Car Park [0.9km]. 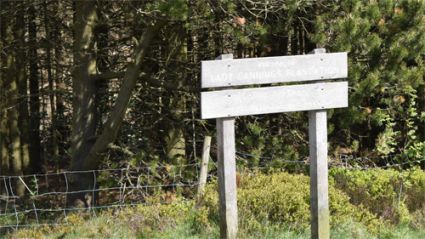 A final short run along the road returns you back to the Norfolk Arms car park. 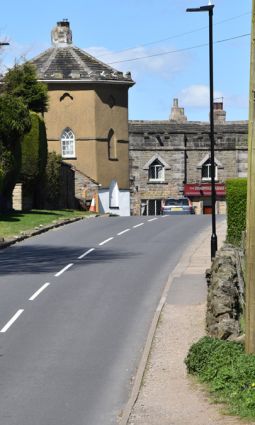 But, the impossible remains with us. Not just in any impressionistic pictures we might create from the trees and brambles in Lady Cannings' plantation. 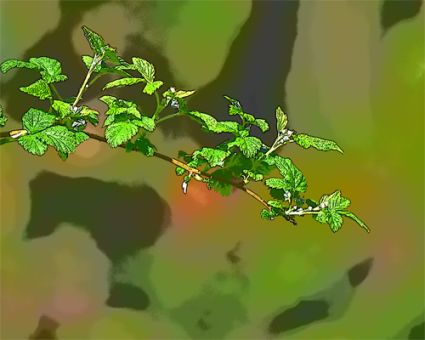 Not just in any pictures we might create of aspects of Lady Cannings' plantation, which are always already incomplete; already in themselves as pictures filled with the impossible. 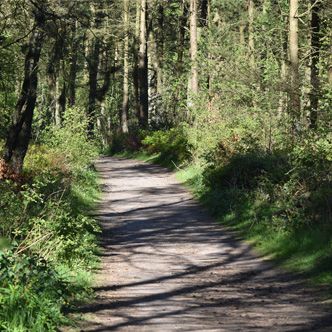 In instrumental terms, of course, many athletes use Strava as a way of providing a focus upon their performance over specific lengths of a given run/ cycle/walk/ swim etc.

Yet, with this picture in mind let’s take this line of thought a little further. The technology provides a way of communicating with other ‘followers’ and, indeed, of ‘following’ others involved in similar activities.

Martin Spence, who’s been using the Strava technology for some time, has fun inventing amusing names for his runs which he ‘shares’ with other ‘followers’ using the App. But, isn’t it with such naming that one turns what could be simply dead representations of, in this case episodes of running, or levels of performance, into a life-giving force, reflecting ways of being on a run – which bring expression of laughter, joy, fun, happiness and so on?

It's quite impossible to measure or calculate in anyway the laughter, joy, fun, happiness, of course. These words give expression to aspects of the impossible at play in our lives.

It was in this context in thinking about the naming of our runs that a call for metanoia came to mind. It seemed to me that in the very process of naming our runs one can begin to make connections, so bringing alive and bringing new life to a given activity with other ways of giving expression to our everyday activities, for example, through literature, various arts, different forms of philosophy and so on. 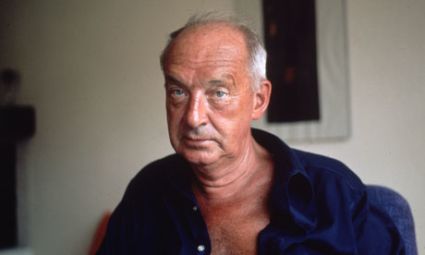 In this way, and in returning to the earlier citation from Nabokov, it is through such inventive naming of runs that one can open one’s self in ‘the crack of light’ to the impossible, between those ‘two eternities of darkness’, which is there hidden in each and every one of our technologies and drives our capitalist world with such seemingly inexorable force.

So, what's the big deal with this call for metanoia? The big deal comes in the naming.

In drawing from various arts, philosophy, sciences, the media, history... in creating our names for our runs, is it not possible to open reflection upon those everyday familiar homogeneous economies of running - where every possible outcome from running gets calculated, everything's supposedly conditioned and largely predictable, and so many are concerned primarily with the calculus of performance. Take a look at all the popular running magazines - you find so many ways of improving your running, however you might define 'improvement'.

But, isn't there something missing with this focus in running upon performance, improvement, quality, and so on? I'm not suggesting that somehow running should abandon any competition, races and so on. The challenge of racing in its many different forms has been there from the times of the Ancient Greeks.

Yet, aren't we in danger of missing the heterogeneous economies at play in our running - which open unconditionally for us as human beings; opening us to the impossible and incalculable dimensions of our existence. The liminal space for play, the sense of freedom encapsulated by running on the hills, the love as an excess beyond anything that can be written of runners and their relationship with their different environments in which they variously run, the aesthetic relationship many runners feel with the earth - landscapes, hills, mountains, woodlands, copses, flowers, meadows, grasses and so on.

In calling for metanoia, then, what I had in mind was the existence of the heterogeneous economy at play in our world, which tends to remain elided in public discussions concerning economy and economies. In opening the challenge of creating a range of names for our runs, as Martin has done, one also invites in consideration of the life giving force of the impossible.

I hope you have enjoyed reading this blog.

I look forward to hearing from you.